MORE FALLOUT FROM "SPY GATE": U.K SPY AGENTS BRIEFED ON JUNK DOSSIER BEFORE TRUMP - TruthSeries
Skip to content
THE TELEGRAPH – Theresa May’s spy chiefs were secretly briefed on an explosive dossier of claims about Donald Trump’s ties to Russia before the US president was made aware of its existence, The Telegraph can reveal.
The heads of MI5 and MI6  and one of Mrs May’s most trusted security advisers were told about former British intelligence officer Christopher Steele’s memos on the Trump campaign in the weeks after his November 2016 election victory.

Well, this just proves right the motion that the UK was in on it all along. In April, President Donald Trump tweeted out a stunning report by former CIA analyst Larry Johnson on OANN saying the former CIA analyst had accused UK intelligence agencies of “helping the Obama Administration spy on the 2016 Trump presidential campaign”.

“Former CIA analyst Larry Johnson accuses United Kingdom Intelligence of helping Obama Administration Spy on the 2016 Trump Presidential Campaign.” @OANN WOW! It is now just a question of time before the truth comes out, and when it does, it will be a beauty! 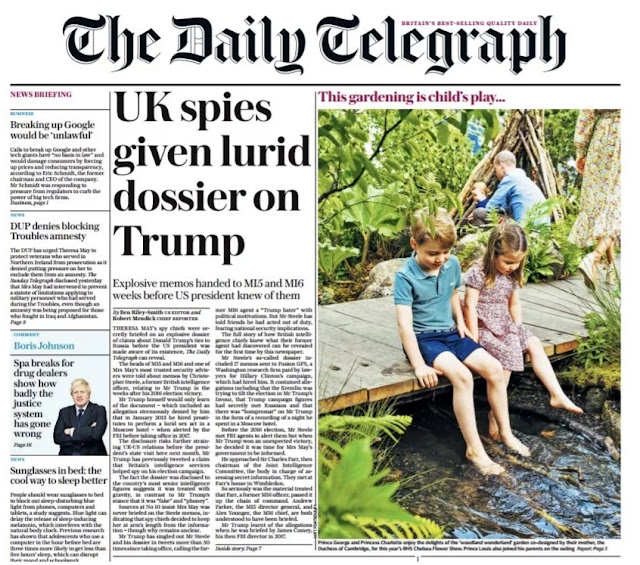 Bruce Ohr and Adam Schiff New bombshell report on the so-called anti-Trump dossier could have many top FBI and DOJ officials fired. According to John Solomon, then senior Justice Department official Bruce Ohr cautioned FBI and DOJ officials back in 2016 that the Steele dossier was connected to Clinton campaign and is likely biased and […]

James Comey and Jim Jordan Jim Jordan, the U.S. Representative for Ohio’s 4th congressional district and the ranking Republican member of the House Oversight Committee. In an interview with Fox News Maria Bartiromo on Sunday Morning, further debunked the the Adam Schiff Democratic memo which was released in February 2018. The memo was released as […]