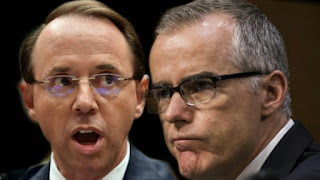 After the firing of former FBI Director James Comey on the 9th of May 2017, The NYT dropped a bombshell report which says;

Mr. Rosenstein made the remarks about secretly recording Mr. Trump and about the 25th Amendment in meetings and conversations with other Justice Department and F.B.I. officials. Several people described the episodes, insisting on anonymity to discuss internal deliberations. The people were briefed either on the events themselves or on memos written by F.B.I. officials, including Andrew G. McCabe, then the acting bureau director, that documented Mr. Rosenstein’s actions and comments.


Rod Rosseinstein debunked this report, calling it “inaccurate and factually incorrect.” while claiming that tge anonymous sources behind the story were obviously biased against his department. He also said, Based on his personal dealings with the president, “there is no basis to invoke the 25th Amendment.”(Related: Pelosi, Schumer TRIGGERED; Trump Swings EXECUTIVE HAMMER On WALL FUNDING!)

In McCabe’s new book, The Threat, he explained that Meetings were held at the DOJ on whether President Donald Trump should be removed from office with the 25th Amendment. CBS News’ Scott Pelley explained on Thursday in a preview of his forthcoming interview with McCabe.

For more on  this watch

Comey Handed Down For Criminal Prosecution

DOJ Inspector General Michael Horowitz testified before the House Committee on Oversight and Reform on Wednesday morning. Horowitz revealed to lawmakers that he criminally referred former FBI Director James Comey for prosecution. The Justice Department ultimately declined prosecution and despite Comey bragging about this, the IG indeed concluded he criminally acted. According to the Washington […]

Deputy Attorney General Rod Rosenstein plans to leave the Justice Department in mid-March. Although sources say Rosenstein’s departure is not related to a controversy surrounding his alleged offer to wear a wire, he faces possible Indictment from his Republican counterparts. (Related; Petrified Nancy Pelosi Unknowingly SMEARS Her Self On Live TV..Watch (Video))  Sen. Lindsey Graham […]

One Reply to “McCabe Drops MASSIVE Bombshell on Rosseinstein, Reveals Coup Against Trump By FBI”