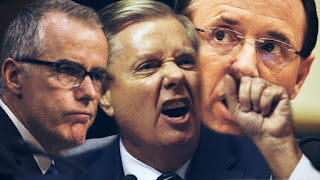 On February 14th, Republican Sen. Lindsey Graham, chairman of the Judiciary Committee demanded both Andrew McCabe and Rod Rosseinstein Appear before the committee at Capitol hill. This was in response to the explosive CBS interview with Andrew McCabe, which uncovered plans to potentially impeach the president.

After Mr. McCabe’s 60 Minutes interview, it is imperative that he, and others, come before @senjudiciary to fully explain how and why a FISA warrant was issued against Carter Page and answer questions about what appears to be, now more than ever, bias against President Trump. Sen. Graham tweeted.

In addition Graham also told reporters Thursday, “I imagine if the shoe were on the other foot, my Democratic colleagues would want to know about that conversation.” when asked if he would subpoena Rosenstein to testify if he refuses to appear before the committee.


President Trump also Slammed McCabe, tweeted “Disgraced FBI Acting Director Andrew McCabe pretends to be a “poor little Angel” when in fact he was a big part of the Crooked Hillary Scandal & the Russia Hoax.
He also added hours later, that “Trying to use the 25th Amendment to try and circumvent the Election is a despicable act of unconstitutional power grabbing. A situation he said only happens “in third world countries.” (Related: Pelosi, Schumer TRIGGERED; Trump Swings EXECUTIVE HAMMER On WALL FUNDING!)

This political scandal blows wide open, months after the bombshell report by the NYT said Rosenstein considered secretly recording Trump. A conversation which includes McCabe and with a possibility of removing Trump with the use of the 25th Amendment.

For more on this watch video

James Comey The truth always finds it’s way out into the open. In an attempt to dodge a question on Friday about whether he (Comey) had confidence in the anti-Trump dossier which was used to get a surveillance warrant on Trump’s campaign members, Comey unknowingly let loose the one truth democrats are unwilling to accept. […]

Nancy Pelosi left, President trump right Democrats tried everything possible, worked tirelessly to make sure they gained control during the midterms but i guess there wasn’t much luck on their side. Well, they did manage to win back the seats in the House and this had Nancy Pelosi bragging and now she got herself caught […]